The Missile Man of India 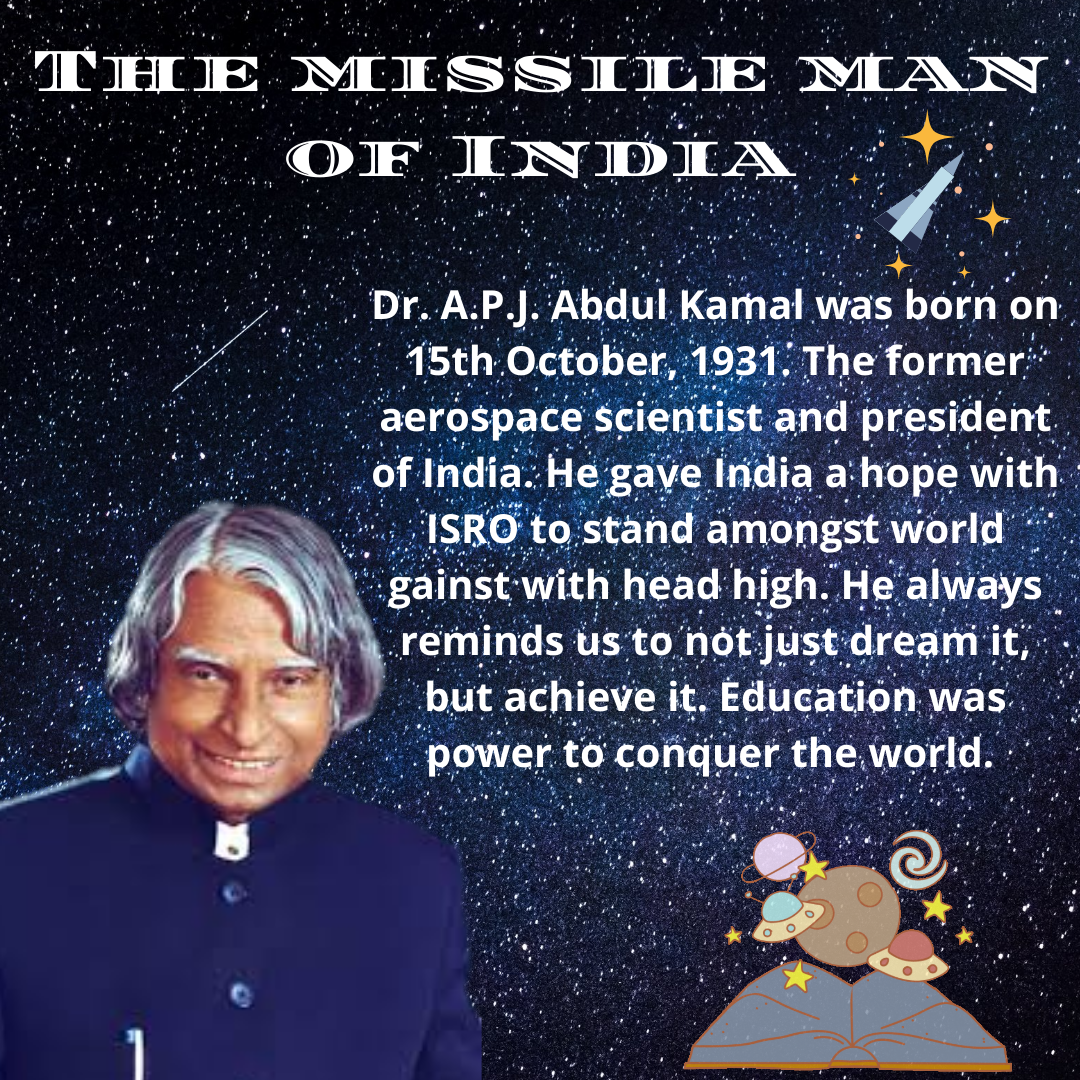 Avul Pakir Jainulabdeen Abdul Kalam (Dr. A.P.J. Abdul Kalam) was born on 15 October 1931 in Rameswaram, India. He was an Indian aerospace scientist who served as the 11th president of India. He had a keen interest in physics, so he took aerospace engineering ad graduated from it. Dr Kalam was the 11th president of India elected in 2002 with the support of the Bhartiya Janata Party (BJP) and the Indian National Congress. He is generally referred to as “People’s President”, as he always worked for the civilian life of education, writing and public service. He was the most beloved President to date and due to his dedicated life, he became the recipient of several prestigious awards, including the Bharat Ratna, Padmavibhushan and Padmabhushan.

He joined Defence Research and Development Organisation (DRDO) as a scientist and science administrator. 1969, Dr Kalam was transferred to the Indian Space Research Organisation (ISRO) where he was the project director of India’s first Satellite Launch Vehicle (SLV-III). He first started work on an expandable rocket project independently at DRDO in 1965 which in 1969, after receiving the government’s approval he resumed the programme to include more engineers. He was later intimately involved in India’s civilian space programme and military missile development efforts. There he worked on Ballistic missile and launch vehicle technology which named him as Missile man of India. Dr Kalam took an active interest in other developments in the field of science and technology. These included a research programme for developing biomedical implants and also supported open source technology for betterment. He predicted that the use of free software on a large scale would bring the benefits of information technology to more people at no cost.

Dr. Kalam aimed for a better and educated India and did his best to fulfil this dream. In his book India 2020, he strongly advocated an action plan to develop India into a “knowledge superpower” and a developed nation in 2020.

He said that India has a core competence for integrated action in these 5 areas:

These five areas are closely interrelated and if advanced in a coordinated way, will lead to food, economic and national security.

Dr Kalam explained, “I feel comfortable in the company of young people, particularly high school students. Henceforth, I intend to share with them experiences, helping them to ignite their imagination and preparing them to work for a developed India for which the road map is already available.” His dream is to let every student to light up the sky with victory using their latent fire in the heart.

It’s the year 2021, yes we failed to fulfil his India 2020 dream, but a little step, a little dream, and little guidance towards his words can change India and its future forever and ever. At last, bring the change in not just your life but embrace others too, and lets together fulfil the dream of our beloved Missile man. A little step towards better tomorrow.