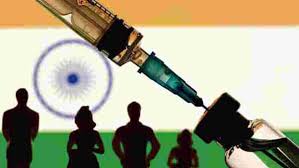 India & China are renewing their geopolitical and geostrategic supremacy by shipping Covid-19 vaccines to low-income and middle-income countries in order to maintain and expand their sphere of influence. Within the prisms of accessing their natural resources; security and military advantage, good will, soft powers exportation. China had sent a donation of inactivated Covid-19 vaccines to Pakistan as China-Pakistan is allies are contemporary undertone. Nevertheless, China-India is inextricably interwoven cum intertwined in terms of the complex interdependent nature of their economies just like the global nature of the world. Since the partition of British India in 1947 and the subsequent creation of the dominions of India and Pakistan, the two countries have been involved in a number of wars, conflicts and military standoffs.

India’s strength is observed as it supplies more than 60% of the world’s vaccines for various diseases. Now, it is leveraging that manufacturing heft by embarking on what has been billed as humanitarian diplomacy- the supply of free vaccines to countries in its extended neighborhood. Notwithstanding the “Vaccine Diplomacy” between India and China; Russia is also a major power leveraging on its soft power by distributing its vaccine “Sputnik V.”  The vaccine is named after the world’s first satellite called Sputnik, launched by the Soviet Union on October, 4, 1957.  The name “signifies the country’s success in being the first to have a vaccine approved,” according to Russian government official, the vaccine gave about 92% protections against COVID-19. Russia therefore, shipped the vaccine to countries like Argentina, Palestinian territories, Venezuela, Hungary, United Arab Emirates (UAE) and Iran.

In fact some reports suggest that Africa will soon receive 300 million of the Sputnik V from Russia. However, during the earlier vaccine inoculation exercise; some rich countries engaged in what is known as “Vaccine Nationalism”. The hoarding and avaricious purchasing of the vaccines for their own citizens to the detriment of poor countries in Africa, the West African sub-region and other developing countries of Asia and the Middle-East. Thus, the United Nations chief has sharply criticized the wildly uneven and unfair” distribution of COVID-19 vaccines, pointing out that just 10 countries have administered 75 % of all vaccinations. Addressing a high-level meeting of the UN Security Council on Wednesday, Antonio Guterres said 130 countries have not received a single dose of vaccine.

At this pandemic, vaccine equity is the biggest moral test before the global community. The wars among rich nations- and between European Union (EU) and Australia over 250000 vaccines are an embarrassment. India, despite its own pressing needs, has gifted over 10 million free vaccines to various nations, commercially exported almost 50million, and is supplying 200 million to the international COVAX initiative. In nutshell, the African Union and sub-regional organizations like ECOWAS should marshal and deploy all the necessary measures viz human, logistical and financial resources; in order to inoculate its whole population with alacrity and gusto. This is national, regional and continental security cum human security, financial security and economic security crises.